Articles in this section

xDai STAKE token has gained a perfect position for its further growth with strong fundamentals and conservative market capitalization. It is ranked amongst top-performing assets since public sale on BitMax.io.

Despite the recent global market volatility, select digital asset projects have displayed strong performance since launching on top-tier platforms. Among the recent listings, STAKE, the native token of xDai Chain, stands out as one of the industry’s top-performing assets since its listing on BitMax.io in late April of 2020. While the token’s price-performance was conservative within the first 24 hours, STAKE pricing has since achieved highs upwards of 7x relative to its initial opening price of $0.55. Multiple success factors have been identified as critical to STAKE’s explosive yet sustained growth throughout its first several weeks following its debut on BitMax.io. 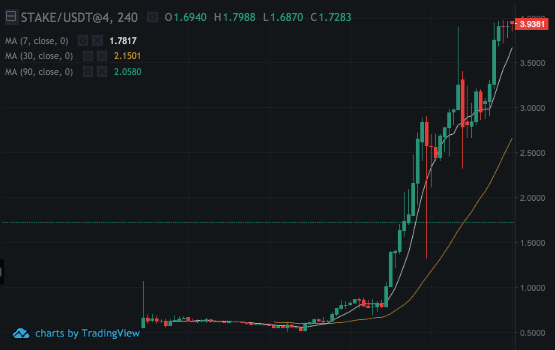 BitMax.io facilitated a public sale on behalf of xDai Chain with a total allocation of $220,000 on April 28, 2020. The public sale was conducted via a novel “auction” mechanism that allowed users to determine the fair value of the STAKE tokens by placing bids between 400 USDT and 550 USDT. With overwhelming community support, the auction was successfully completed just in 15 seconds with a final bid price of 550 USDT. This definitely sent a strong signal in terms of market demand and user excitement for the token.

BitMax.io enabled trading for STAKE on April 29, 2020, with an opening price of $0.55. Following the open, the token touched temporary highs of $1.07 before stabilizing near $0.60. STAKE closed its first 24 hours of trading at $0.66 – representing a conservative first-day gain of 20%. The lackluster narrative remained unchanged for the first one week of STAKE’s trading with the token unable to break key resistance levels and even reaching lows of $0.50.

However, very soon STAKE’s price performance underwent a dramatic change following the launch of an incentivized “pre-staking” program hosted by BitMax.io with an estimated 35.4% APR. Once the pre-staking program went live, STAKE began an upward trend of staggering price appreciation, achieving gains in excess of 500% within 72 hours. Excitement for the pre-staking program was notable not only in STAKE’s price performance, but also in the community’s eagerness to delegate their tokens. In total, over 450,000 tokens were delegated within the first 72 hours of pre-staking launch, representing a network stake ratio of over 40%.

Therefore, STAKE ranks amongst top-tier projects such as Matic Network, WazirX, and Solana as a top-performing asset since its public sale on BitMax.io.

Whereas skeptics might be quick to point out a myopic focus on digital assets as purely speculative investments, the technology and underlying utility of STAKE helped the project attain a dedicated following among industry watchers and users long before STAKE’s stellar price performance in the secondary market.

xDai Chain is a USD stable blockchain launched through a collaboration between the MakerDAO Foundation and POA Network. It is also a sidechain compatible with Ethereum that uses xDai (a stablecoin issued with value 1-1 pegged to Dai on Ethereum) as a native token for payment and gas and governs through a new Proof-of-Stake algorithm — POSDAO via a chain-agnostic staking token named “STAKE”. A key value proposition of xDai Chain is the creation of Ethereum side-chains that can execute Solidity smart contracts faster, cheaper, and at predictable prices.

xDai Chain has notable investors including B-Tech, an incubator fund and accelerator for blockchain projects structured as a joint venture between BitMax.io and Focus Labs. Focus Labs has shown a solid track record as an early strategic investor and advisor for top-tier projects such as Matic Network with the team possessing a particular aptitude for supporting projects from an early “seed” stage.

xDai Chain’s impressive technology is the driving force behind the expansion of the project’s extensive developer community and its forward-thinking innovation, such as compatibility with Metamask and BurnerWallet. Comprehensive partnership with BitMax.io spanning from auction facilitation, listing, and staking services has further complemented the project’s compelling fundamentals and supported ecosystem development for STAKE.

Building Sustainable Success with BitMax.io Before and Post Listing

BitMax.io, a global digital asset trading platform, has achieved recognition with its recent primary listings, with assets on average attaining prices 3x relative to their listing price within the first 24 hours of listing (average 24-hour high for BitMax.io’s last three primary listings is 340%. (RVX: 257%, STAKE: 194%, XNS: 568%)). In particular, the platform set itself apart from other competitors with its unique holistic approach to listing – encompassing global marketing support, community engagement, and infrastructure development.

“Many exchanges serve as gatekeepers – charging projects exorbitant “listing fees” without providing strategic value-add the project. BitMax.io aims to promote success for its listing partners by designing and implementing customized go-to-market strategies so the projects can focus on building utility and fundamental value,” notes Shane Molidor, Global Head of Business Development at BitMax.io.

BitMax.io has built a first-of-its-kind “pre-staking” program called StakeVault to provide a sandbox infrastructure for Proof-of-Stake projects to test staking parameters prior to their official launch of staking. STAKE is the first asset supported by BitMax.io StakeVault and the program has provided a strong foundation for the project to familiarize its user base with the act of delegating. At present, over 40% of STAKE’s total network is delegated via StakeVault. BitMax.io will serve as a validator for xDai Chain once the mainnet goes live in Q3’20 and intends to facilitate a seamless transition for token holders delegating STAKE on the platform. The market’s response to StakeVault has been overwhelmingly positive, with the price of STAKE appreciating more than 500% within 72 hours since pre-staking was first launched.

The strategic value of such integrated alignment between BitMax.io and its primary listings appears evident with its latest three primary listings achieving average price high of 340% within the first 24 hours following listing – RVX: 257%, STAKE: 194%, XNS: 568%. So far, the performance of these assets has also been sustainable – as of May 18, 2020, the average current return on investment (“ROI”) is 3.3x.

With an all-time high of 720% and current ROI at 3.0x (as of May 18, 2020.), xDai Chain’s native token, STAKE, one of the industry’s top-performing assets, is definitely well-positioned for continued growth with its strong fundamentals and conservative market capitalization. In the meantime, BitMax.io’s comprehensive listing service including an innovative auction public sale, listing, and pre-staking support has again proved instrumental to building out its holistic alignment with top-tier blockchain projects like xDai Chain and the successful launch of STAKE on the secondary market.